This weekend, the LNG bunker vessel Optimus, delivered to Elenger Marine by the Dutch company Damen at the end of October, performed the first ship-to-ship bunkering in the port of Hanko in Finland. 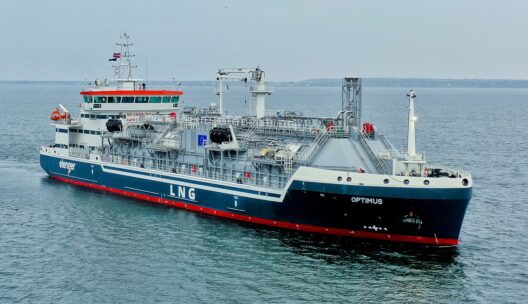 In its first weeks of operation, Optimus has already performed 5 successful STS bunkering operations of Tallink MegaStar in the Old Port of Tallinn, and the first bunkering of UECC M/V Auto Energy in the port of Hanko has been added.
„Our cooperation with UECC has been successful since Elenger has offered truck-to-ship bunkering services to their LNG vessels earlier. Thanks to the already familiar ships and the good preparation of the Optimus crew, the bunkering in the port of Hanko went smoothly,” confirmed Sergei Danilov, Head of Bunkering Operations at Elenger Marine.

While the cargo ship Auto Energy was bunkered in the port, Optimus can bunker LNG to different types of ships on the high seas aswell. Its tanks and pumps allow for up to 6000 m3 of liquefied natural gas to be delivered to clients at a rate of up to 1000 m3 per hour. The LNG bunkering vessel Optimus itself also operates on LNG fuel.

The service area of the LNG bunkering ship comprises the part of the Baltic Sea centred around the Gulf of Finland.