The brand new liquefied natural gas (LNG) bunkering vessel of Elenger Marine has arrived in Estonia from the Dutch shipyard to become the first of its kind to offer bunkering service in the Gulf of Finland area of the Baltic Sea. The ship, named Optimus, was christened with the Estonian Prime Minister Kaja Kallas, as the ship`s godmother. 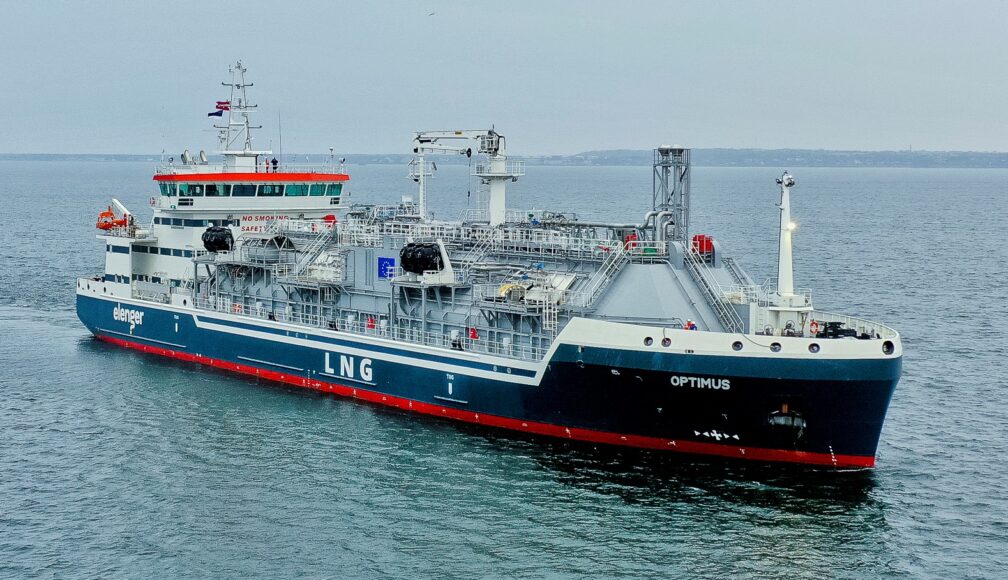 At the Tallinn Old City Harbour ceremony, Kaja Kallas noted how liquid natural gas is an environmentally friendly fuel used in shipping. “The green transition is one of the greatest challenges Estonian companies are facing and also one of their greatest opportunities to ensure competitive ability internationally. I hope the shipping industry will soon be able to change to carbon-neutral fuels, and LNG is an important transitional solution on this route.”

“This is the first such bunkering vessel in our region to start supplying LNG fuel to ships,” said Ain Hanschmidt, Chairman of the Supervisory Board at Elenger, adding that the new vessel will contribute to preventing nearly 2 million tonnes of CO2 emissions during its lifecycle and will allow shipping companies to provide clients with a smoother and quieter travel experience.

Within a matter of a few years, Elenger Marine, has become the largest LNG bunker services supplier in the Baltic region, delivering LNG to Tallink’s shuttle Megastar (with Tallink’s new shuttle MyStar to join next year) as well as to a number of cargo vessels in the ports of Tallinn, Helsinki and Hanko.

The service area of the LNG bunkering ship will comprise the part of the Baltic Sea centred around the Gulf of Finland. The vessel can bunker tankers, cargo ships, passenger vessels and cruise ships in ports and in offshore waters.  It’s tanks and pumps allow for up to 6000 m3 of liquefied natural gas to be delivered to clients at a rate of up to 1000 m3 per hour. The LNG bunkering vessel, which is almost a hundred metres in length, was built by the Dutch company Damen.

“We are very pleased to be playing a significant role in making sustainable shipping more accessible to ship-owners and operators in the Gulf of Finland,” added Peter Anssems, Damen Sales Manager for East Europe. “We are confident that Optimus will give many years of productive service to Elenger.”

Capable of carrying 6000 m3 of liquefied natural gas, the vessel belongs to the investment company Infortar and will be commercially operated by Elenger Marine. The construction of the ship was co-financed by OP Bank, and aid was granted by EU CEF (Connecting Europe Facility).